Since 2003, the Bayerische Staatsbibliothek has been searching for items in its collections which were disowned or looted during the time of the national socialist regime. Its orientation point in doing so is the obligation accepted by all public institutions of the Federal Republic of Germany in a common declaration in 1999 to find and return all cultural assets disowned in the course of the persecution by the NS regime, in particular stemming from Jewish property. The support by the German Lost Art Foundation now makes it possible to conclude the research and return holdings.

The Bayerische Staatsbibliothek is one of the founding members of the Research Association for Provenance Research in Bavaria (Forschungsverbund Provenienzforschung Bayern, FPB), which was established in 2015 at the initiative of the Bavarian Ministry of Education and Culture, Science and the Arts. The association provides a network and exchange platform for state-run institutions active in the field of provenance research.

The verification of the around 65,000 volumes acquired by the Bayerische Staatsbibliothek between 1933 and 1945 has been concluded. It is suspected that around one percent of these books were disowned or looted in the time of the national socialist regime. The research of the individual titles has been largely concluded, still outstanding restitutions are continuously prepared.Another 30,000 volumes given to the Bayerische Staatsbibliothek by the US military government after 1945 still have to be verified. These items belonged to book collections of Nazi organisations. Random sampling has shown that these collections contain further looted items.

To the virtual exhibition 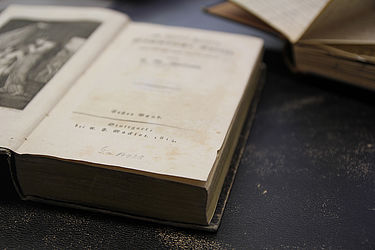 The Bayerische Staatsbibliothek wants to return identified disowned or looted materials to the rightful owners or their heirs or legal successors with a minimum of bureaucracy. Several restitutions have taken place since 2006, and more are being prepared. In case the exact provenance of looted books cannot be established, the finds shall be documented in the Internet database "Lost Art" of the German Lost Art Foundation. Further, all items in question are marked correspondingly in the BSB's own catalogues. Disowned and looted materials and suspected items can be searched in the OPACplus/ BSB Catalogue by inputting "BSB-Provenienz: NS-Raubgut".

OPACplus/ BSB Catalogue  (searching for: bsb-provenienz AND ns AND raubgut) 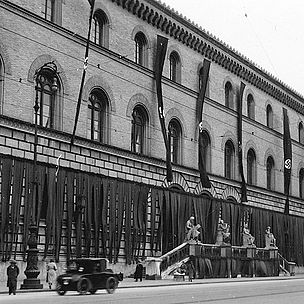 The Bayerische Staatsbibliothek during National Socialism 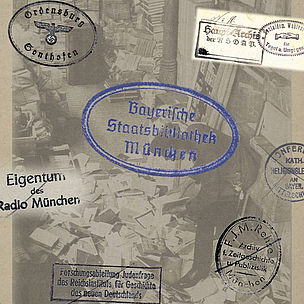 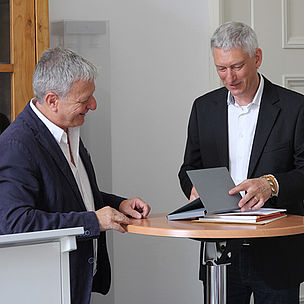