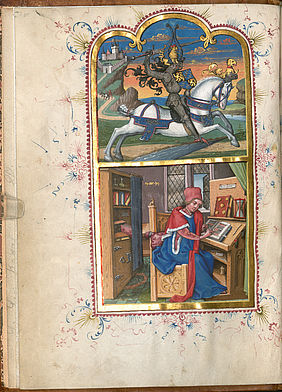 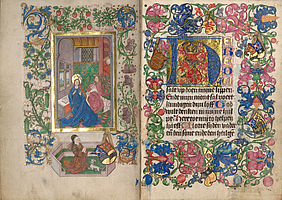 The prayer book is a characteristic product of the art of illumination of the lower Rhine area in the 15th century (Worlds of images, part 1 – Luxury books) | © BSB/ Cgm 84 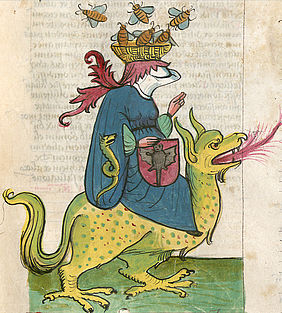 Etymachia (struggle of virtues and sins): The personification of envy riding on a dragon. Electoral Palatinate, around 1430 (Worlds of images, part 2 – Ethereal and worldly) | © BSB/ Cgm 3003 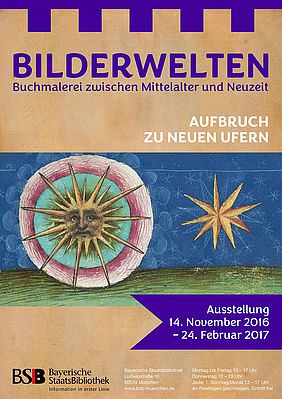 In a three-part series of exhibitions in 2016/ 2017, the Bayerische Staatsbibliothek shows a representative cross section of its abundant treasures of German book illumination of the late Middle Ages and early Renaissance. High-carat exhibits, part of which will be publicly shown for the first time, provide a fascinating insight into bygone worlds.
The opening exhibition with superb "Luxury books" is followed by a second part of "Ethereal and worldly" works, such as splendid, colourful tournament books, intimate devotional books, richly illustrated law books and chronicles.
The third part "Off to new pastures" is devoted to the move into the modern era and – on the occasion of the 500th anniversary of the Reformation in 2017 – the Bible, from Charlemagne to Martin Luther (further information about part 3 in the press release of 3 November 2016: Dürer, Cranach, Altdorfer and Furtmeyr – Crowning finale of the exhibition trilogy "Worlds of images" in the Bayerische Staatsbibliothek).
Press release of 3 November 2016

With its far-reaching upheavals, the 15th and the early 16th centuries are among the most interesting periods of European history. Almost all spheres of life are challenged: the role of kings and emperors, the church and the Pope, the political structures, the forms of prayer and devotion, the text of the Bible, even the function and the use of the images. The discovery of America and of the sea route to India make the known world larger, old views of the world and orders are becoming unhinged, new inventions change the population's everyday life.

Like hardly any other medium, miniatures, drawings and xylographs in books convey a special kind of original testimonial of their time. Frequently, they have been protected well between the book bindings over the centuries and – in contrast to other genres of art – still present themselves in luminous colours today. The emergence of paper started a fundamental change in the techniques of illustration. In addition to exquisite opaque-colour painting of a quality that is hard to surpass, now there also emerge simple text illustrations using only a small number of colours, whose vibrancy leaves the viewer spellbound. The artists behind the works remain anonymous for a long time. Only in the late middle ages do we learn of the book illustrators' names more frequently, such as Master Craftsman Martin and Berthold Furtmeyr from Regensburg. Later, there are also famous names such as Hans Holbein the Elder, Albrecht Altdorfer, Lucas Cranach and Albrecht Dürer, who are known from panel painting and mural art.

The Bayerische Staatsbibliothek presents its big annual exhibitions on Google Arts & Culture, an Internet art and culture portal, and in the form of an app.

A richly illustrated catalogue of 256 pages has been published by the Quaternio Verlag, Lucerne. This catalogue could be produced thanks to the generous support of the Ernst von Siemens Art Foundation.