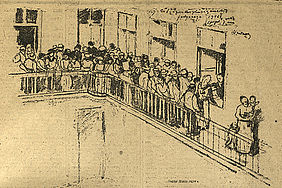 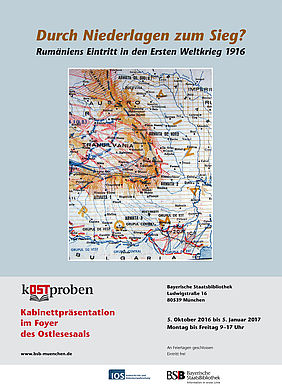 Poster of the cabinet presentation | © BSB

The kOSTprobe presentation shows documents on the entry of Romania into the First World War in 1916. They include documents about the military history of Romania of 1916 from the collections of the Bayerische Staatsbibliothek. A display of newspaper articles complements the kOSTprobe with 15 elaborately reproduced panels giving an overview of the reception of events and the war correspondence in the contemporary international press.

The outbreak of the First World War confronted Romania with a political dilemma. It had been associated with Germany, Austria-Hungary and Italy in the Triple Alliance since 1883. King Carol I wished to lead the country to war at the side of the Central Powers (Germany, Austria-Hungary), partly out of loyalty to the house of Hohenzollern, partly out of loyalty to the alliance. However, a large part of the political elite favoured an entry into the war at the side of the Entente (France, Great Britain and Russia), in order to claim Transylvania for Romania, while others in turn recommended a policy of neutrality, which was finally asserted against the king by Minister President Ion I. C. Bratianu. Soon after, on 10 October 1914, Carol I died after 48 years of reign.

Carol's successor was his nephew, Ferdinand I. Married to an English princess, selected as successor to the throne at an early age and taken to Romania, Carol's great loyalty to the house of Hohenzollern was rather alien for Ferdinand. He sympathised to a much higher degree than his deceased uncle with the arguments of the advocates of going to war at the side of the Entente. They finally asserted themselves: In the treaty of Bucharest of 17 August 1916, Romania had the annexation of Transylvania and the Banat laid down in the case of winning the war. On 27 August Romania then declared war to its hitherto ally Austria-Hungary. Unification with Bessarabia, which was settled by Romanians, but controlled by Russia, did not enter the equation.

At the time of declaring war, the Romanian army nominally had sufficient reserves, but the officers were inexperienced in warfare for the most part, and the bad traffic routes and organisational shortcomings impaired the provision of ordnance and other supplies. Despite initial successes in Transylvania, the Romanian army was soon forced onto the defensive. Within only a few months, Wallachia and large parts of Moldova were occupied by German, Austrian-Hungarian and Bulgarian troops. The capital of Bucharest was vacated and the government was transferred to Iași in the north-east of Romania. The advance of the Central Powers could be stopped only in the summer of 1917 with the aid of Russia. When Russia was lost as ally due to the October Revolution, Romania asked for a cease-fire with the Central Powers in spite of the treaty concluded with the Entente, resulting in the Treaty of Bucharest of 7 May 1918. Regardless of this, Romania again declared war to the Central Powers one day before the end of the World War on 10 November 1918, and could thus take part in the Paris Peace Conference of 1919 as a victorious power.

In addition to the exhibits, the Bayerische Staatsbibliothek holds a comprehensive collection of primary and secondary literature on Romania in Romanian, all western and many further languages. This literature is made available by the library for order in the catalogue and also via the interlibrary loan system. Within the framework of the "Fachinformationsdienst Ost-, Ostmittel- und Südosteuropa" (Specialised Information Service for Russian, East and Southeast European Studies) supported by the German Research Foundation, the Bayerische Staatsbibliothek provides research and education Germany-wide with printed and electronic literature on the history and politics, philology and ethnic studies of Romania, as well as many further areas of specialisation.