30 March 2017, 19:00
An interactive reading-lecture with Henning Beck (in German)
As part of the series "Zur Sache..." – Authors in the Staatsbibliothek 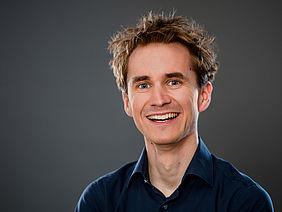 Our brain is confronted with ever-increasing requirements. We are bombarded by information, we write e-mails, chat and surf the web at the same time. And apparently, our brain is not made for the digital age: It is permanently distracted, inaccurate and forgetful. But we should be grateful to our brain for these weaknesses in particular! For only the errors of the brain, says the neuroscientist Henning Beck, are what makes us creative. Beck casts a look behind the scenes of the most flawed biological structure of the world, our brain, showing where its weaknesses lie exactly. He pleads: It is not efficient thinking that we should strive for, but the smart organisation of knowledge with breaks and clever forgetting. A neurobiological confidence-booster showing us an unconventional way to greater powers of concentration, better decision-taking qualities and creativity.

Henning Beck, born in 1983, studied biochemistry. After his diploma, he was a researcher at the Hertie Institute for Clinical Brain Research in Tübingen, obtaining a doctorate there at the Graduate School of Cellular & Molecular Neuroscience. He regularly publishes articles in the journals Wirtschaftswoche and GEO-Magazin and holds lectures on topics such as "neurobiology and creativity".