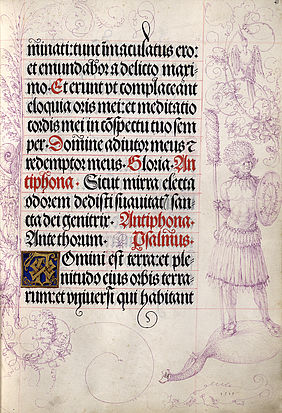 About the prayer book of Emperor Maximilian I

The prayer book of Emperor Maximilian I is one of the most famous works of European art. With its drawings by Albrecht Dürer, Lucas Cranach the Elder, Hans Baldung Grien, Albrecht Altdorfer, Hans Burgkmair the Elder und Jörg Breu the Elder, the book unites the most outstanding representatives of the "Old German" art. There is only one single specimen of this prayer book, of which only a small number of copies was printed in Augsburg in 1513 on behalf of the Emperor, which shows coloured quill drawings by these artists. It is unknown whether Maximilian ever got to hold this so richly adorned book in his hands. The images possibly served as templates for planned, but not produced coloured xylographs of the small print run, which was possibly intended for the Order of Saint George. The printed book with the exquisite hand drawings has been divided into two parts since the 16th century. The part with the drawings by Albrecht Dürer and Lucas Cranach is kept in the Bayerische Staatsbibliothek, while the other part is preserved in the Bibliothèque Municipale in Besançon. On the occasion of the exhibition and likewise in the lecture, both parts are shown and appreciated together again after a long time. The Bayerische Staatsbibliothek has produced a virtual facsimile copy of the reconstructed complete book.

Dr. Karl-Georg Pfändtner, one of the curators of the exhibition "Worlds of images", works as member of the research staff at the Manuscript Cataloguing Center of the Bayerische Staatsbibliothek. The lecture is dedicated to the new image conceptions of the great artists of Dürer's time, dealing with a globalised world in motion in their drawings. In the prayer book of Maximilian, representations can be found of peasants fighting lansquenets, just like a coconut palm climber, an elephant rider or a Malayan resident of Sumatra. Scenes from antique mythology can be found alongside the illustration of the Christian history of salvation, exotic animals next to images depicting local plants and animals.