10 February 2022, 18:30
On the occasion of the annual exhibition "Facing the Balkans. South-East Europe in photographs by Harald Schmitt" 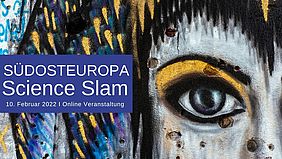 What did Bosnian art look like in the Middle Ages?
Why was there a conflict between Austria-Hungary and Serbia about the river Drina?

These and many more questions will be answered by the "South-East-Europe Science Slam" at the Bayerische Staatsbibliothek on 10 February 2022. On the occasion of the exhibition "Facing the Balkans", six scholars compete for the attention and favour of the audience. All of them are researchers of South-East Europe and want to convey interesting and instructive, surprising and entertaining facts about this multi-faceted region. The slam participants each give an introduction to their current research project in a ten-minute talk. The audience votes for the best contribution at the end.

From master student to doctoral student, up to professor, there are scholars of all career stages. The following participants will introduce their current research projects:

The contributions are partly in the English language.

Overview of information on the event