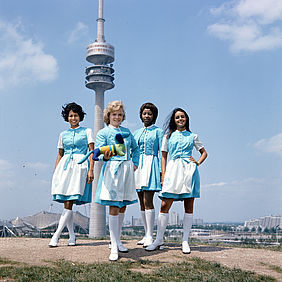 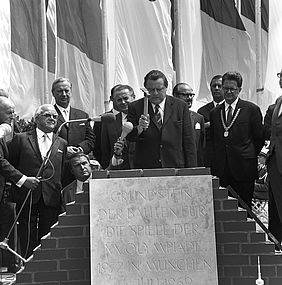 Franz Joseph Strauß at the laying of the foundation stone for the high-rise structures on the Olympic site, 14 July 1969. Photographic archive of Georg Fruhstorfer | © BSB/Image Archive 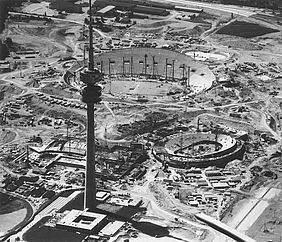 The Olympic Games of 1972 have left a permanent mark on Munich, up to the present day. On the occasion of its 50th anniversary, the Bayerische Staatsbibliothek dedicates a great annual exhibition to this event. Almost 140 photographs from the time between 1965 and 1972 show the Munich Games from various perspectives. The images are from numerous photo archives curated by the Bayerische Staatsbibliothek, among them photos from Max Prugger, Karsten de Riese and from the stern Photo Archive. They were acquired a short while ago and are shown publicly for the first time. Further, the exhibition features photographs by Georg Fruhstorfer, Felicitas Timpe and Joachim Kankel. All images are presented in the form of high-resolution reproductions.

The bandwidth of motifs shown reaches from the construction works on the Olympic site to photos of famous artists who visited the Olympic Games as participants in the cultural programme.

The exhibition is subdivided into five modules:

Since Munich had been selected as the venue of the XXth Olympic Games in April 1966, the city had been preparing for this large-scale event. In the course of the ensuing six years, the underground and the suburban railway network were built, new housing estates were constructed and roads, such as the Mittlerer Ring, were planned. When the Games were opened in August 1972, Munich had developed into one of the most modern big cities in Germany. Various photographers whose archives are preserved by the Bayerische Staatsbibliothek accompanied these far-reaching changes with their cameras.

2. From the Oberwiesenfeld fallow ground to the Olympic site

The transformation of the Oberwiesenfeld area into the Olympic site can be reconstructed precisely on the basis of spectacular aerial images. Go on a journey back in time, to the years when a new city quarter was created in the north of Munich. The innovative roof construction connecting the stadiums with each other is still regarded today as one of the most ambitious construction projects in the history of the Federal Republic of Germany.

Munich was in a state of exception from 26 August to 11 September 1972. Over four million guests from all over the world visited the city. This part of the exhibition addresses the diverse cultural programme complementing the sports competitions of the Games and the design concept of the Games. A large architectural model of the Olympic site rounds off the module and makes the eventful days of the Olympic summer come alive.

The terrorist attack on 5 September 1972, in which eleven Israelis were assassinated, shocked the world public. Photographers working for the journal stern recorded this event in numerous images. The module shows a selection of the most important photographs.

What remains of the Olympics of 1972? The most important remainder is the Olympiapark, with the park still not having lost any of its attraction today. It is visited by thousands of tourists every year and is the venue of large-scale sport and cultural events.

Accompanying the exhibition in the library, we also present a virtual exhibition of a number of select pieces.

To the virtual exhibition  (in German)