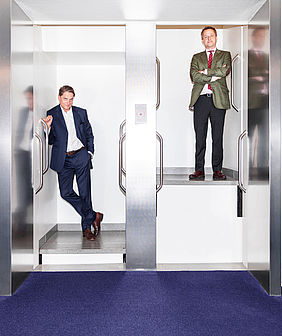 "Top and bottom" has become a more complex issue today than the dispute about Hartz IV benefits, low wages or the taxation of property. For the first time in decades, those left behind and forgotten about are making themselves heard in earnest: those who merely feel this way and those for whom it is actually true. Their fears and their desires are about social justice, but, which is new, are also about national identity. The new question "Who belongs?" has become as important as the old question “Who has what means?” In this book, a debate is thus started which can no longer be negotiated clearly by taking "left-wing" or "right-wing" positions. Jakob Augstein and Nikolaus Blome conduct this debate in a tried and tested manner: provocative, controversial and always entertaining.

Jakob Augstein studied German linguistics, dramatics and political science in Berlin and in Paris. After career stages at the Süddeutsche Zeitung and the ZEIT, he has been the publisher of the weekly journal Der Freitag since 2008.

Jakob Augstein and Nikolaus Blome discuss a current topic every week in the TV show “Augstein und Blome” on Phoenix.