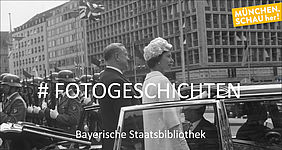 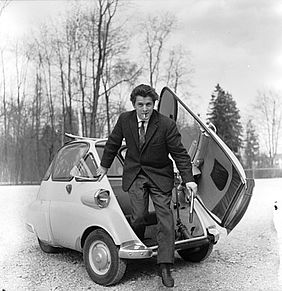 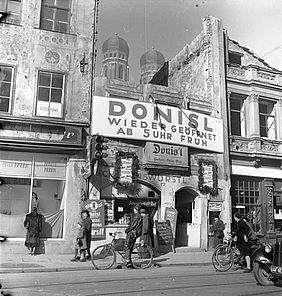 "MUNICH. LOOK here!" gives a first introduction to the extensive photographic archives of the Bayerische Staatsbibliothek. The photographic collection currently encompasses over 17 million images and goes far beyond local or regional focus. Many of the photo archives simultaneously mirror the central role of the Bavarian capital as a motif and location of photography. The photographs taken in Munich, therefore, are at the centre of the exhibition.

The exhibition is subdivided into six modules:

Delve into the photographic archives of the Bayerische Staatsbibliothek and go on an exciting journey through time.
Munich from the mid-19th century up to the 1970s – captured in photographs.

Besides Paris and London, Munich was the most important centre for the development and proliferation of photography in the 19th century. The scholars and artists based in the city made a significant contribution to the increasing popularity of this new technology. The library's two treasure vaults present originals of early photographs, and explain the technique used to create these pictures. These early photographs are followed by images of the first Munich photographer Alois Löcherer (1815 – 1862) and of the court photographers Joseph Albert (1825 – 1886) and Franz Hanfstaengl (1804 – 1877), accompanied by images taken in the famous photo studio Elvira.

From Munich into the mountains

The excursion first leads the visitor to the Werdenfelser Land region and on to Tyrol. Photographer Bernhard Johannes (1848 – 1899), based in Partenkirchen and later in Merano, and his successors produced early alpine photographs of the ascent of the Zugspitze, studio photographs – some of which are quite peculiar – , as well as testimonials of Bavarian traditions. During the 1920s and 1930s, photographer Josef Beierl (1905 – 1943) captured the mountains of the Berchtesgaden region with his camera. His photographs are shown here for the first time. For reasons of conservation, the images of this and of all further modules are presented as high-quality reproductions.

You can take a personal souvenir photo of your visit to the exhibition in a reconstructed historical photo studio.

Events such as the outbreak of the First World War, the revolution of 1918 – 1919, the rise of the NSDAP in Munich, the burning of books and the November pogroms of 1938 are documented in the collections of the Image Archive. The photographs are predominantly from the photographic archive of Heinrich Hoffmann (1885 – 1957), Adolf Hitler’s personal photographer.

Photographs of the destroyed city, of war veterans returning home, improvised market stalls between mountains of debris, the clearing away of rubble, the flourishing black market, but also a number of first concerts are characteristic of the recollection of the post-war era. The photographers Georg Fruhstorfer (1913 – 2008), Helmut Silchmüller (1906 – 1980) and Tino Walz (1913 – 2008) captured this eventful time in their images.

Music, theatre, opera, cabaret or ballet – the photographs by Felicitas Timpe (1923 – 2006) ought to offer something for every visitor to the exhibition. Some people might remember the Rolling Stones or the Beatles at their shows in the 1960s and 1970s. In her pictures, Munich photographer Timpe documented Munich’s cultural life in the years between 1950 and 2003. Her archive encompasses around one million images.

Between tradition and progress

The legendary carnival in Munich, the Oktoberfest, the celebration of the city's 800th anniversary in 1958, student protests, the arrival of the first immigrant workers and finally the 1972 Summer Olympics are some of the topics in the exhibition’s last section. Raft rides on the Isar in the 1950s, people in traditional costumes at a parade on Maximilianstrasse or the research reactor in Garching, the "atomic egg", under construction were popular motifs at the time.

The Image Archive of the Bayerische Staatsbibliothek

The Image Archive of the Bayerische Staatsbibliothek is composed predominantly of photographs. However, the collection also includes images in original graphic techniques, such as woodcuts, copper engravings and lithographies. The extensive collection has been indexed and catalogued in part and can be viewed in a special database.

After "stern" magazine’s analogue photographic archive was handed over to the Bayerische Staatsbibliothek in 2019, the Image Archive now encompasses 17 million images and has thus become the largest contemporary-historical photograph collection maintained by any public-sector institution.