15 February 2017, 19:00
Lecture by Prof. Dr. Bénédicte Savoy (Technical University Berlin)
A part of the series "Excursion – Insight into the world of science" 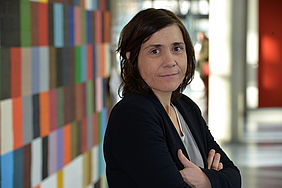 The looting of objects of cult and art has always formed part of the cultural history. From Antiquity to the modern age there are numerous examples of cultural assets being appropriated by force, thus becoming loot. Napoleon had thousands of art objects, books and archive materials divested. The First World War was not least also a fight for art and cultural assets. The extensive theft of cultural assets during and after the Second World War has likewise changed the geography of art in Europe.

The partially brutal, massive and retrospectively not reversed appropriation of cultural goods of other peoples also resulted in an impressive mutual cultural-historical enrichment, however – and has posed interesting questions for art-historical research: Whose property is beauty? Is there a national ownership of cultural assets? Or aren't the museums and the countries that have profited from the massive shifts of cultural heritage the provisional safekeepers of a common heritage of mankind?

The art historian Bénédicte Savoy approaches these questions in her lecture, also addressing the current debate about looted art.