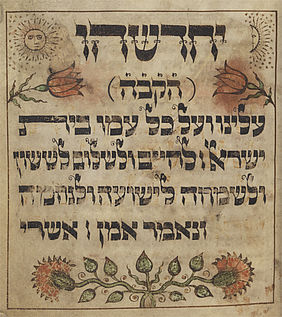 Benediction on the occasion of the new moon feast | © BSB

On the occasion of the fiftieth anniversary of taking up diplomatic relations between Germany and Israel, the Bayerische Staatsbibliothek shows a selection of new acquisitions forming part of its widely noticed collection of Hebrew works in cooperation with the Consulate General of Israel. The spectrum starts with manuscripts from Syria, Italy, Swabia and China. The small location of Sulzbach in the Upper Palatinate was a trademark name for early printed works known all over Europe. Many publications in the Yiddish language were written in Jewish displaced persons' camps after the end of the war. The prolific production of literary works in Israel builds a bridge into the digital future.