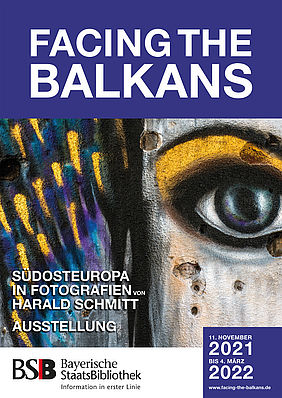 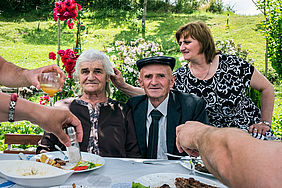 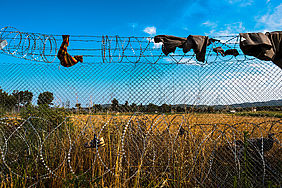 Munich and Ljubljana, the capital of Slovenia, are separated only by 400 kilometres, and the other Balkans states are also only a few hours away by train. Despite the geographic proximity to South-Eastern Europe, however, the countries, their culture and history are little known in our country.

The photo exhibition "Facing the Balkans" intends to change this and invites visitors on a trip through South-Eastern Europe. Visitors follow the view through the finder of the photo journalist Harald Schmitt. While he travelled the entire world as a former STERN photographer, he scarcely knew the countries in the south-east of Germany. He and his wife Annette thus got into their car and set off. Their declared aim: addressing their preconceptions about the Balkans.

Schmitt travelled to South-Eastern Europe six times between 2015 and 2021. In Albania, he met the head of an Islamic Dervish order, in Romanian Transylvania he accompanied the hay making, in Moldava he made the acquaintance of creative businesspeople who are trying to revive their home villages, in Bosnia he witnessed the daily life and plight of refugees on the Balkan route. Subdivided into seven sections, "Facing the Balkans" shows these and many more faces of South-Eastern Europe. The exhibition shows 100 journalistic photographs which give an insight into life in the Balkans as experienced by the winner of six World Press Photo Awards. Framed, high-quality reproductions in the formats 35x45 to 100x140 will be displayed in the Fürstensaal and the grand staircase. The images are flanked by explanatory texts and informative graphic representations which convey interesting background knowledge.

For everybody who wishes to learn more about the Balkans, an  accompanying catalogue is published with texts by scholars of the Leibniz Institute for East and Southeast European Studies (IOS): In an introductory essay, Prof. Dr. Ulf Brunnbauer, the academic director of the IOS, sketches the history of representation of the Balkans in art, media and science, pointing out challenges held by the future. The seven exhibition sections are put into their contexts by concise essays by Prof. Dr. Ulf Brunnbauer (IOS), PD Dr. Heike Karge (University of Regensburg) and Dr. Edvin Pezo (IOS).

Free-of-charge guided tours are offered weekly to interested visitors. In addition, "Facing the Balkans" can also be visited on the Internet as a virtual exhibition, independently of location and time. The digital edition is complemented by audio commentaries of the photographer on selected images.
To the virtual exhibition  (in German)

In January 2022 a Science Slam is planned, on the occasion of which young scholars offer an insight into their research projects on South-East Europe.

Perhaps a number of the exhibition's visitors follow suit, deciding, like the photographer in 2015: "The Balkans are only a few hundred kilometres away from us. That’s reason enough to discover them."