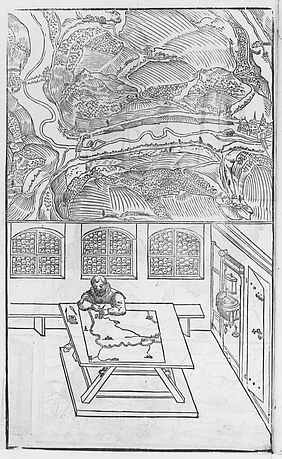 Surveyor at the measuring table and bird’s eye view of the landscape. Xylograph of Paul Pfinzing, around 1598 | © BSB/ Image Archive

The Pfinzing atlas, created by the Nuremberg trader, mathematician and cartographer Paul Pfinzing (1554 – 1599), forms part of the most important works of cartography produced in Nuremberg in the 16th century. It contains hand-drawn and hand-coloured maps of the imperial city of Nuremberg and its territory, as well as various territorial representations from the private environment of the Pfinzing family. The maps document the sovereign claim of the imperial city of Nuremberg, in particular vis-à-vis the margrave of Brandenburg-Ansbach. They are based on the survey of distances and angles which Pfinzing carried out in the terrain with the aid of a step counter and a hiking compass and which he subsequently transformed into a map with the aid of a construction table designed by him.

On the cabinet presentation

The Department of Maps and Images presents reproductions of selected maps in the form of a cabinet presentation. The sheets on show are from the facsimile copy produced in 1994 of the original preserved in the Nuremberg state archive.