The manuscript collection of the Bayerische Staatsbibliothek records the addition of precious items: A total of three high-ranking German-language manuscripts of Bavarian origin could be acquired at the same time for the library from the antiquarian book trade. After conservatory treatment by the library’s own Institute of Conservation and Restoration and cataloguing, they are now being digitized and will be made available for academic research subsequently. 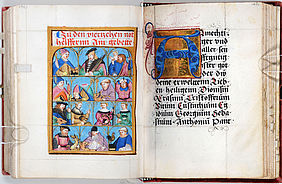 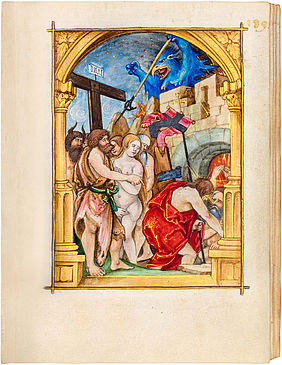 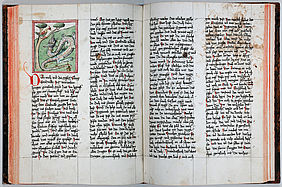 Two of the three valuable manuscripts form part of the most precious pieces of book illumination between the middle ages and the modern era. Their illustrations are from the famous Nuremberg book illuminator Nikolaus Glockendon (died in 1534).

The prayer book for Wolfgang Hofmann, factory manager of the Fugger dynasty in Nuremberg, and his wife Helena was created between 1513 and 1514/ 15. It was illustrated by Glockendon and is one of his earliest works. It comprises 299 parchment sheets. The single-column texts composed of 13 lines are executed in excellent calligraphy. Ten whole-page miniatures and 120 illuminated initials show exquisite book illumination art. The very well preserved, compact volume of a small format (12 x 8.7 cm) – as was usual for prayer books – has a red velvet cover and a stamped gilt edge.

Particularly extraordinary miniatures can be found in the Passion tract authored by Heinrich von St. Gallen, which was completed in 1521. This codex represents the most valuable one of the three acquisitions. The text is oriented on a printed version of the work of the year 1509. The notable and special aspect of this work is that the 23 whole-page miniatures in opaque colours explaining the text were created separately and inserted into the book block at a later stage. Glockendon modelled them on Albrecht Dürer’s "Kleine Holzschnittpassion" of 1511.

The third and oldest of the new acquisitions is a collection of fables. It was written on paper in two-column format by Johannes Mör in Bavaria in 1453. The codex is composed of 88 sheets and measures 26 x 19.5 cm. The 84 coloured pen drawings framed in red at the beginning of each fable show a number of special image creations. What is important here is the provenance of the codex: It is the last known specimen, which had been in private ownership so far. The text of this first German fable prose collection was translated into German by Ulrich von Pottenstein around 1411/ 17.

Director General Klaus Ceynowa highly appreciates the important new acquisitions: "The manuscripts have now come to the place that is appropriate for them. They strengthen and emphasise the role of the Bayerische Staatsbibliothek as a treasure trove of cultural heritage, holding one of the world’s largest and most important collections of manuscripts. I am proud and happy that we have managed to add such spectacular items to one of the central core collections of the library."

About the manuscript collection of the Bayerische Staatsbibliothek