The database made available within the framework of the Specialised Information Service for Russian, East and Southeast European Studies contains archive materials on the history of the Soviet vacation camp Artek on the Crimea. The collection offers valuable insight into the educational system and social history of the Soviet Union. 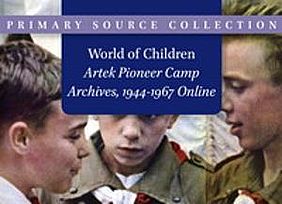 Opened in 1925 on the south coast of the Crimea near Yalta, Artek was a young pioneer camp (and is still open today). The camp was the showcase project of Soviet endeavours to create possibilities for recreation for children and adolescents. It was a great privilege for pioneers from the Soviet Union and the rest of the world to spend the summer there.

The database contains digital materials (no searchable full texts) of medical reports, pioneer diaries and letters, collections of songs, event calendars, film recommendations, radio features and a lot more. The documents from the Russian State Archive for Socio-Political History (RGASPI) cover the period from 1944 to 1967.

The collection offers a variety of pathways to explore the history of daily life, mentality, children, youth and social politics and also the history of genders and tourism of the Soviet Union. The summer camp programmes on the Crimea exemplify attempts, measures and failures of the Soviet regime to create a "homo sovieticus" starting from infancy.

The database is accessible free of charge Germany-wide using the system of national licenses. Germany-wide access is provided within the framework of the Specialised Information Service for Russian, East and Southeast European Studies at the Bayerische Staatsbibliothek with the support of the German Research Foundation (DFG).