Today, travellers have a wide range of information at their disposal, from conventional travel literature to experience reports on the Internet. But which media did travellers use in the late Middle Ages? Who was even able to travel? Pioneers of travel at that time were pilgrims. As a result, one of the most important German-language travel reports of this time is thanks to a Jerusalem pilgrim, Hans VI Tucher (1428 – 1491). 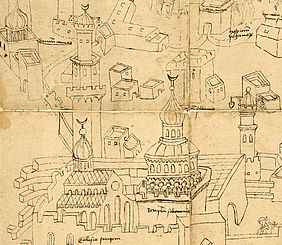 The virtual exhibition uses twelve exhibits to illustrate the exciting history of his travelogue from the manuscript to the print. Hans VI Tucher as a person and his family are also examined more closely. One highlight is the epitaph for his sister-in-law Adelheid with a view of Jerusalem directly reflecting his own travel experience.

The virtual exhibition is a project of the Tucher'sche Kulturstiftung (Tucher Cultural Foundation), created in collaboration with the Bayerische Staatsbibliothek.

To the virtual exhibition on bavarikon

Hans came from the Nuremberg patricians, the Tucher family. Trained as a businessman, he managed the Tucher Company trade relations of Nuremberg and Venice. When his brother Endres resigned in 1476 and retired to the monastery, Hans took his place on the Inner Council.

On 6 May 1479, he and his council colleague Sebald Rieter (1426 – 1488) set out from Venice on a journey to the Holy Land, visiting Jerusalem, Saint Catherine's Monastery on Sinai, Cairo and Alexandria in Egypt. After nine months, the pilgrims returned to Venice on 12 March 1480. On 10 April they arrived back in their home town to the cheers of the Nuremberg inhabitants.

Both pilgrims kept a joint diary about their journey. Tucher had probably already envisaged publication during the trip, which he pursued on his return to Nuremberg. The transformation of the report, written as a reminder of one's own memorable journey, into a work of an exemplary nature for pilgrims, can be reconstructed precisely. In spite of the underlying religious motivation, the travelogue is marked by an unusually modern spirit of observation in which the modern era is heralded. In the first part, the focus is on the holy sites in Jerusalem and the pardon to be granted there. In the second part, the view opens up to foreign lands, where the rich information on offer is interwoven into the itinerary by excursions into the Egyptian cultural world. The work was very popular in its conception as a pilgrim guide, which is expressed not least in its many editions to date.