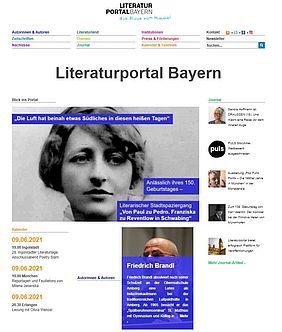 The Free State of Bavaria had made available special funds in the amount of EUR 38,000 for this purpose. The programme was carried out by the Literaturportal Bayern. Among the publications there are individual texts, blogs, literary excursions, thematic essays, podcasts, video readings, audio books and comics. Only last week, on the birthday of the recently deceased great poet SAID, a so far unpublished text by him was published in the portal. All contributions are available at www.literaturportal-bayern.de/kultur-trotz-corona. The funding also encompassed further persons involved, who collaborated with the authors, such as producers or speakers.

"The programme is continued with EUR 20,000 in 2021", Sibler announced. "The crisis has also had a great impact on creators of literature. Therefore, we support them with our programme 'Culture in spite of Corona', enabling them to stay in contact with their audience. At the same time, we honour their valuable work. In times like these, in particular, literature can be a stronghold offering support, hope and confidence. I am glad that we could help Bavarian artists in this way." Moreover, the programme has contributed to the literature portal further doing justice to its core concept of a dynamically networked knowledge and relay platform, said Sibler.

The Literaturportal Bayern – a successful example of digital culture conveyance

"The Literaturportal Bayern is a successful example of the manifold possibilities of digitally conveying culture. During the pandemic, in particular, it offers the unique opportunity to creators and those active in culture to remain visible to their audience", said Dr. Klaus Ceynowa, Director General of the Bayerische Staatsbibliothek.

The Literaturportal Bayern images the wide literary landscape of the entire Free State and provides creators of literature with manifold possibilities of actively playing a part in shaping its contents:

More detailed information on publishing and funding by the Literaturportal Bayern can be obtained by writing to the following e-mail address:
kontakt@literaturportal-bayern.de

Source:
Literaturportal Bayern
Press release No. 115 of 31/05/2021 by the Bavarian State Ministry of Sciences and the Arts