On time for the end of the 100-year anniversary of the First World War and the November Revolution, the adding of the old subject headings from the time between 1914 and 1981 in the homonymous special catalogue of the Bayerische Staatsbibliothek could be concluded. 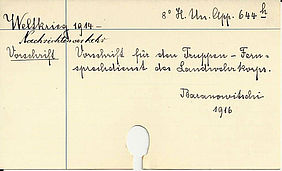 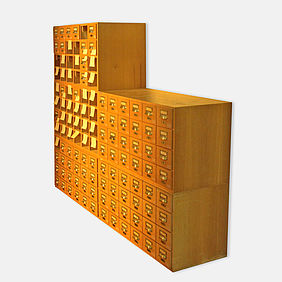 The "Spezialkatalog Erster Weltkrieg und Novemberrevolution" went online in July 2015 with the support of the German Research Foundation. It comprises both varied source material from the time of the war and of the revolution and an extensive collection of international research literature.

The core of the special catalogue is a war-themed collection of the Bayerische Staatsbibliothek started in 1914. Between 1914 and 1981, this collection was entered in a special card catalogue on the basis of subject headings. This catalogue is composed of 120 card-index drawers and contains a total of around 62,000 index cards, with part of the associated holdings having been destroyed by fire in the Second World War.

The complete transfer of the old subject headings to the electronic special catalogue facilitates search, particularly for older titles, to which usually no other electronic keywords were allocated. Partly, the old subject headings themselves are of historical source value. Thus, for example, there are terms no longer commonly used today, such as "Kieler Matrosenrevolution" (Kiel sailors’ revolution) instead of "Kieler Matrosenaufstand" (Kiel mutiny) or "Deutsche Revolution" (German revolution) instead of "Novemberrevolution" (November Revolution), but also judgemental terms, such as "Deutschtum" for the German identity, "Durchhalten" (perseverance), "Englische Heuchelei" (English hypocrisy), "Heldentaten" (heroic feats), "Heldentod" (heroic death), "Fluchtabenteuer" (escape adventure) or "Farbige Hilfsvölker" (coloured auxiliary forces). In the special catalogue, the old subject headings can be found in each case under the heading "Altes Schlagwort" in the individual hit.

Special catalogue on the First World War and the November Revolution