Revolutionary moves, the spirit of 1968 in Munich, writers, painters and artists in and around Breitbrunn on the Chiemsee – the Literaturportal Bayern presents new contents again on interesting historical and regional aspects of Bavarian literature in its modules Blog, Themen (topics) and Literaturland (land of literature). 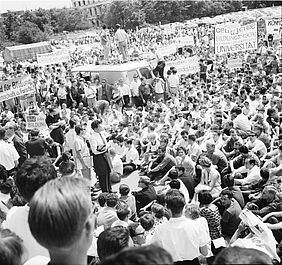 The year before 68: Demonstration of students against the state of emergency in education, 1967, Glyptothek Munich | © BSB/ Image Archive 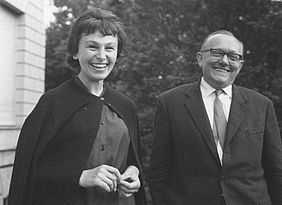 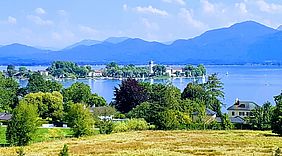 The 132nd issue of the journal "Literatur in Bayern" published on 29 June 2018 had "departures" as its central topic. Continuing the new blog series on the revolutions of 1918 and 1968, which started with Ret Marut, the forgotten pseudonym of the writer B. Traven, the Literaturportal Bayern has published several posts in its blog in the meantime. Among them, there are the inauguration speech of the newly re-erected monument for Gustav Landauer on the Waldfriedhof graveyard in Munich, an extract from the revolution novel "Roter Frühling" by Norbert Göttler, an article about the humanitarianism of Erich Mühsam and a report about the current exhibition "Die Freiheit erhebt ihr Haupt" ("Freedom raises its head") in the Munich city hall's art gallery about Kurt Eisner's short-lived revolution.

To the entry in the blog of the Literaturportal Bayern

Munich in the year 1968: In the Bavarian capital the revolutionary spirit of the 68 movement affirmed itself and started a phase of transition, which allowed the cultural scene and its artists to step out of the shadow of the post-war period. Writers experimented with new ways of writing and incorporated a new dimension of describing society and social criticism in their catalogue of topics, among them authors such as Wolfgang Koeppen ("Pigeons on the grass"), Gisela Elsner ("The giant dwarfs"), Karin Struck ("Class love"), Wolfgang Bächler ("Traumprotokolle"), Gert Heidenreich ("Füchse jagen"), Uwe Timm ("Heißer Sommer") and many others. The new topic in the Literaturportal Bayern explores these persons connected with 1968 and their works.

To the entry in the "Themen" module of the Literaturportal Bayern

In the 19th century, the area around Breitbrunn on the Chiemsee attracted many summer visitors, among them writers, painters and artists. Later writers such as Hans Leip or the authors of the "Gruppe 47", Hans Werner Richter and Ilse Aichinger, left their mark on the literary scene there. Among the prominent artists, there were Gunild Keetman, composer and colleague of Carl Orff, and Peter Keetman, a representative of the so-called Subjective Photography. Willibald Demmel was one of the painters who helped the traditional Chiemsee painting style come to bloom again. The cultural excursion in the Literaturportal Bayern starts at the church John the Baptist at the pond of Breitbrunn, proceeds via the Seestrasse (Keetman) and the Wolfsberger Strasse (Gruppe 47) to Urfahrn, the place of residence of Felix Schlagintweit, writer and Germany's first urologist, and ends on the Aischinger Höhe in Gstadt with its outdoor paintings and painters' villas.

To the entry in the "Literaturland" module of the Literaturportal Bayern