The new virtual exhibition at the cultural portal bavarikon illustrates how a piece of paper became one of the most important means of payment. Exhibits from five centuries give an introduction to the history of paper money. The exhibition informs about the function, production and design of paper money in the course of time. 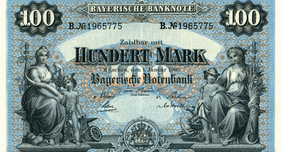 Banknotes are much more than just a means of payment. They reveal a state's history and culture and are the country's "business card". At the same time, they themselves are part of a chequered history: How a piece of paper became one of the most important means of payment – that's what this exhibition shows us.

Exhibits from 5 centuries introduce you to the history of paper money. Learn more about how paper money worked, was produced and designed over time.

The first known banknotes from the 14th to 18th centuries were often produced by territories or states. Their issue served to reorganise finances and was usually related to wars and economic crises. They only played a minor role in cash transactions. This changed fundamentally in the 19th century when the banknote became the main means of payment. Industrialisation and urbanisation triggered a high demand for cash, which could no longer be met by coins.

At the same time, banknotes evolved into printed graphics of the highest quality. They reflect contemporary trends and preferences. Form, colour and motifs – the variety of design is great. Banknotes not only show our cultural heritage, they are part of it themselves.