The Bayerische Staatsbibliothek has been making the music manuscripts from the personal papers of the most prominent composers available online for several years, among them autographs of Gustav Mahler, Josef Rheinberger, Max Reger, Heinrich Kaminski, Hugo Distler and Ermanno Wolf-Ferrari. At the beginning of the year 2020, the works of two of the most important German composers of the first half of the 20th century lost copyright protection: Richard Strauss (1864 – 1949) and Hans Pfitzner (1869 – 1949). 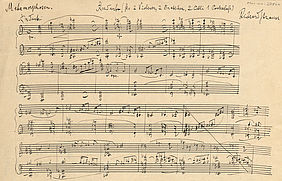 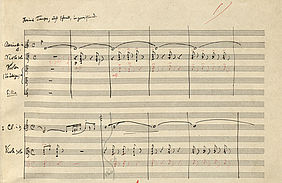 Already during the lifetime of the composer, the Bayerische Staatsbibliothek started collecting the works of Richard Strauss systematically. Today, the library holds the largest Strauss collection held by any public-sector institution worldwide, which continues to be complemented. At the end of 2019, the Bayerische Staatsbibliothek newly acquired a short score on Strauss's opera "Die schweigsame Frau"; in January 2020, a short-score sheet on his unfinished symphonic poem "Die Donau" could be acquired.

The digital copies of the music manuscripts of Richard Strauss and Hans Pfitzner are now available online almost in their entirety to everybody interested.