In 2016, the Bayerische Staatsbibliothek acquired nine Ethiopian parchment manuscripts in Ge'ez, the ancient literary language, which is still used today by Ethiopian Christians as their liturgical language. With respect to content, the manuscripts are psalms and liturgical texts. 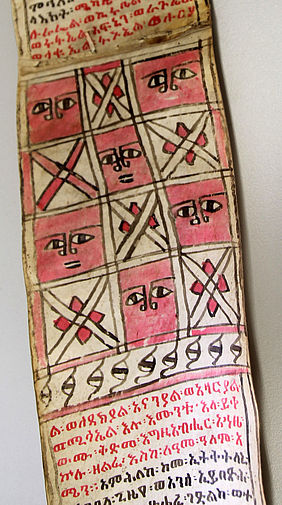 Four magic scrolls bear witness to the popular belief. Created by priests, they were used to fight demons causing illness. Their length is presumed to correspond to the body height of the ill persons. Since the Bayerische Staatsbibliothek already holds 50 magic scrolls, this purchase constitutes a valuable expansion of the collection.

The Bayerische Staatsbibliothek holds more than 180 Ethiopian manuscripts. The oldest Ethiopian manuscript that can be found in the German language area is a Psalter (Cod.aethiop. 1), which originally formed part of the library of Johann Jakob Fugger and thus belonged to the library's collection at the time of foundation.

Further information on the Ethiopian collection