The film collection "Socialism on Film" comprises documentary films and motion pictures, weekly newsreels and feature films created in the states of the Eastern Bloc, but also in Spain, China, Vietnam or Cuba. It is important for studies of East and South-East Europe, since it gives insights into all aspects of life behind the Iron Curtain, thus documenting audio-visually the period from the Russian Revolution up to the end of the Cold War. 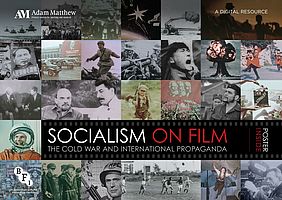 Socialism on Film: The Cold War and International Propaganda (detail of the flyer) | © Adam Matthew Digital

The films form a counterpoint to the perception of the communist countries by the West, since they shed a light on their self-image and self-perception during the times of the important political and social events of the 20th century.

Among these, there are political-military overthrows (wars and revolutions) in Europe, Asia and Central America, i.a. the Russian Revolution, the Second World War and the Holocaust, the Cold War or the nuclear war. Their implications are underlined by numerous newsreels and programmes which convey a curated, ideal image of the political, social and economic developments, and, beyond this, an idealised day-to-day life in the communist countries.

The collection has been subdivided into 24 sub-collections. For studies of East and South-East Europe, films from the following collections are of particular interest:

The film material has been synchronised in the English language, provided with English subtitles and transcribed in its entirety. The transcripts are available in the form of downloadable PDF files.

A comprehensive description (in German) can be found in the blog OstBib.
Blog article in OstBib

► Socialism on Film: The Cold War and International Propaganda