The Bayerische Staatsbibliothek expands its digital services again, launching the newspaper portal digiPress for the presentation of digitized newspapers. Up to the end of the year, the research portal will almost triple in volume: from currently 340 to over 1,000 copyright-free historical newspaper titles. 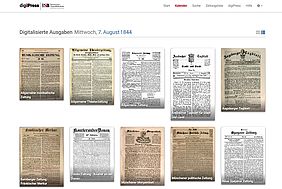 With regard to volume and scope, digiPress is thus currently the only service of this kind offered by a German library. In the final expansion stage, 7.6 million digitized newspaper pages will be available.

The digitized printed media presented in digiPress range from the 17th century to predominantly the 1920s. The focus – and at the same time the collection emphasis of the BSB – is on Bavarian newspapers since the 17th century, unique titles such as revolutionary newspapers of all political directions (1848/ 1849), party journals of highly diverse political orientations, the Catholic press in Bavaria, trade and associations' newspapers, as well as humoristic-satirical publications. A large number of the newspapers retrievable in digiPress are of supra-regional importance. In total, the Bayerische Staatsbibliothek holds 5,250 different newspaper titles. The library thus makes available one of Germany's largest collections of newspapers.

bavarikon offers a further possibility to access digiPress directly from its home page. The portal to the art, culture and regional studies of the Free State of Bavaria thereby expands its digital holdings, for the first time presenting a large collection of historical newspapers.