The Directors General of the Bayerische Staatsbibliothek, Dr. Klaus Ceynowa and Dr. Dorothea Sommer, were delighted to take a look at the artist’s book created in 2002, for which Anselm Kiefer treated photographs with ash and lead. "Die Ungeborenen" – the unborn – are all children who were aborted, never begotten or those who will be born in the future. The prominent recent acquisition joins a further Libri Selecti of the artist: The large-format "Euridike" came to the collection of artists’ books almost 30 years ago. 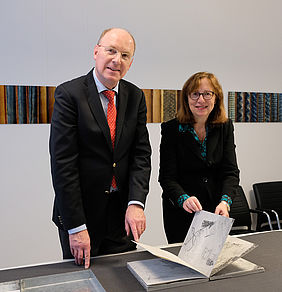 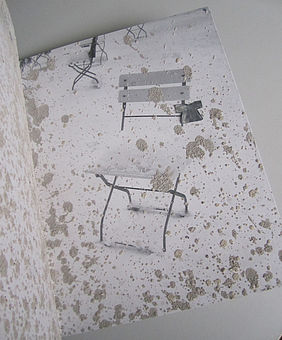 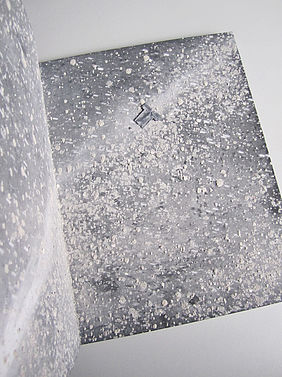 "Actually, I am a master of the small format", Anselm Kiefer recently said in a conversation with Ferdinand von Schirach. As much as this self-assessment may be surprising: The prominent recent acquisition for the collection of artists' books of the Bayerische Staatsbibliothek seems to be a typical work by Kiefer also with respect to this. Almost 20 momentous original collages, essentially ash and lead on photographs of around 30 x 23 centimetres. 108 specimens of the book were created in 2002.

The literally "underlying" photographs show folding chairs covered in snow in a snowy winter's night, with empty little dresses hanging on them. Interspaced, there are abstract photographs of the night sky and snow flurries with a cosmic air. Everything is covered by splodges of ash, sometimes to a greater, sometimes to a lesser extent, and by mounted metal dresses, the material heaviness of which emphatically underlines their emptiness: These are the dresses of the "unborn", thus of those children who have been aborted, but also of those milliards of existences which exist in the semen, but have never been conceived, and of all those who will be born in the future. Always resonant is the delusional wish to be unborn, as formulated by Paul Celan, revered by Kiefer. Also resonant – in contrast to other works by Kiefer rather implicitly here – is the association with National Socialism, with those heaps of empty dresses in concentration camps, the images of which are seared in our collective memory. There is no innocent landscape, says the artist. Things fundamentally are beings to him, are alive. Lightness and life are conceivable only together with heaviness, rigour and death. He thus creates huge planes of lead, metal books weighing tons, but he thus likewise creates small books with frozen dresses.

"Die Ungeborenen" are not just any subject to Kiefer, but a subject that has preoccupied him frequently and in different formats since his youth. Seven years ago, for example, there was an exhibition of paintings with the same title in Paris. Acquired in Switzerland and so far held by hardly any public library worldwide, the book with its depth of association, which cannot nearly be described here in keywords, confidently takes its place next to the great "Euridike" acquired for the collection almost 30 years ago – one of those unique, large-format books which can be found in Kiefer's works much more frequently than editions like our new acquisition. Incidentally, the major part of his creative work was dedicated to the book, Kiefer said a few years ago. Welcome to our Libri Selecti!

Lilian Landes, curator of the collection of artists’ books
This text will be published in the issue 1/ 2020 of the journal Bibliotheksmagazin.