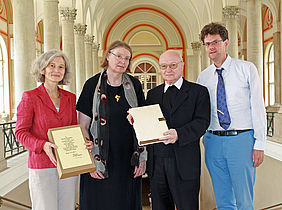 The manuscript Clm 6211, which had come to Munich from the cathedral library of Freising in the course of the secularisation, forms part of the treasures of the Bayerische Staatsbibliothek. On 166 parchment sheets, the codex conveys a copy of the Deliberatio supra hymnum trium puerorum ("Deliberation on the hymn of the three children in the fiery furnace") by Saint Gerard of Csanád, a text of philosophical-theological content, probably created in Salzburg or Admont around the year 1070.

Born in Venice around 980, he later entered the Benedictine order, became abbot and finally the first bishop of the diocese of Csanád – at the time forming part of Hungary, today forming part of Romania, Serbia and Hungary. He wrote the above-mentioned work there around the year 1040. It is regarded as the first and, for several centuries, unique specimen of its kind in the entire South-East European area. The representative copy with a large margin contained in Clm 6211 is considered to be the only preserved text witnessing the work of Gerard of Csanád. In the year 1046, he was subjected to martyrdom, was canonized in 1083 and is the patron saint of the Hungarian capital of Budapest and one of Hungary’s patrons saint. His relics are kept in Csanád, Stuhlweißenburg, Venice and Budapest.