The Bayerische Staatsbibliothek complements its renowned collection by two very rare works of the Czech artist Josef Váchal (1884 – 1969): "Ďáblova zahrádka, aneb přírodopis strašidel" ("The devil's garden, or the natural history of spirits") of the year 1924 and "Šumava umírající a romantická" ("Bohemian Forest dying and romantical") of 1931. The two impressive, leather-bound folio volumes are illustrated with exquisite coloured wood engravings and rank among the absolute masterpieces of Czech modern art between the two world wars. 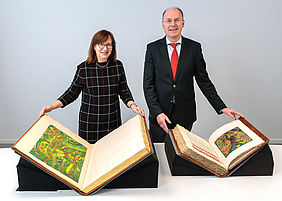 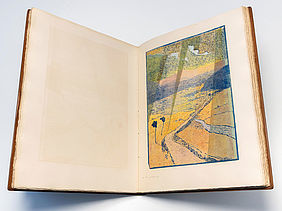 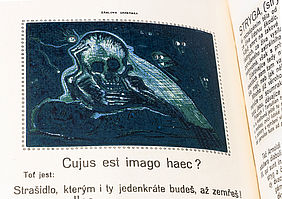 The devil's garden, or the natural history of spirits – artist's book by the Czech artist Josef Váchal | © BSB/ H.-R. Schulz 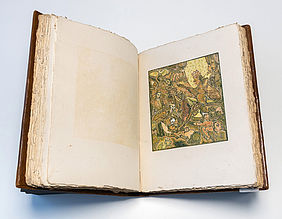 The devil's garden, or the natural history of spirits – artist's book by the Czech artist Josef Váchal | © BSB/ H.-R. Schulz

The larger one of the two volumes, the "Bohemian forest", weights 20 kg and measures 65 x 49 cm. Váchal worked on it for almost three years. The text, which is composed of 8,014 hand-carved and hand-cast letters, is adorned by 74 coloured wood engravings in a total of 544 colours. All in all, only 11 copies were printed, however which were not bound into books in their entirety, but were partly sold or given as presents in the form of individual graphic works. The work is an artistic monument dedicated to the whole mountain range on both sides of the Bavarian-Czech border, and at the same time an ecological wake-up call against the destruction of nature by mankind.

The smaller one of the two books (46 x 35 cm), "The devil's garden, or the natural history of spirits", has the concept of a modern, enlightened, scientific-encyclopaedic work. Váchal also refers to it as the "Brehm's Animal life on ghosts" for this reason. The spirits are classified and their individual types are described. The appearance of the ghosts and spirits, their effects and their occurrence are described, stating their Czech, German and Latin nomenclature. Most of them are illustrated by images. According to the imprint, the work on the book, of which 17 copies were printed, took three years or 3,560 hours.

Both works fit excellently into the collection of the Bayerische Staatsbibliothek in the fields of Eastern Europe, artists’ books and Bavarica. In addition to two early author’s books of the year 1910 and a convolute of handwritten, illustrated letters by Váchal from the period between 1942 and 1951, the Bayerische Staatsbibliothek owns numerous original editions to which Váchal contributed as an illustrator, as well as facsimile copies of his author’s books and an extensive collection of secondary literature about him.

Josef Váchal (1884 – 1969) was largely self-educated as an artist. The trained book binder is one of the most inventive Czech artists of the first half of the 20th century. His best known works are books – authored, illustrated, type-set with hand-crafted letters, printed and in most cases also bound by him in person. He used to refer to himself as a wood engraver. Wood engraving (not wood cutting!), a technique which he constantly developed and brought to greater technological perfection, was the most important technique to him by far. Váchal’s preferred sources of inspiration were religion, theosophy, magic, mysticism, spiritualism and occultism. His works are full of transgressions, equivocalities, ambiguities, contradictions, paradoxes and mystifications. Irony, parody and persiflage are among his preferred stylistic devices.