Following the Evas Töchter (Eve's daughters) exhibition at the Monacensia in the Hildebrandhaus (2018) and looking back on 100 years of women's suffrage, the bavarikon exhibition wants to take influential women writers in Bavaria into account. On display are digital copies from Munich's female writers, all of whose personal papers are kept in the Bayerische Staatsbibliothek – their fictional works and essays, their correspondence with the city's cultural and literary personalities within and outside the women's movement, as well as portraits of their most important representatives. 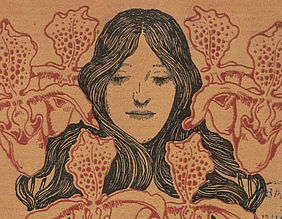 The bourgeois women's movement began in Bavaria in 1886, when two young women from Dresden came to the Bavarian capital: Anita Augspurg (1857 – 1943) and Sophia Goudstikker (1865 – 1924). The two women wanted to live together and earn their living accordingly, and together they founded the „Elvira” photo studio (1887), which soon became the nucleus of the women's movement. Many renowned female artists and writers were portrayed here, including Emma Merk (1854 – 1925), who not only embodied the new emancipated type of woman as an unmarried independent woman but also lived close to the photo studio. Her apartment became a meeting place for Munich's middle-class women, but also for male artists and scholars, not least the poet and professor of economics Max Haushofer (1840 – 1907), Emma Merk's later husband.

After the "Gesellschaft für modernes Leben" (Society for modern life), founded in 1890 under naturalistic auspices, the "Gesellschaft zur Förderung geistiger Interessen der Frau" (Society for the promotion of women's intellectual interests) was founded in Munich four years later and later became the "Verein für Fraueninteressen" (Association for women's interests) (1899). From now on, the women's movement took its course both artistically and intellectually.