From the Wessobrunn prayer to Lorenz von Westenrieder – the new virtual exhibition in bavarikon offers an overview of the most important and most interesting monuments of literature and language held by the Bayerische Staatsbibliothek as part of its collection of Bavarica. Look forward to documents bearing testimony to the early Middle Ages, works of the early modern age, spiritual and courtly literature and much more. 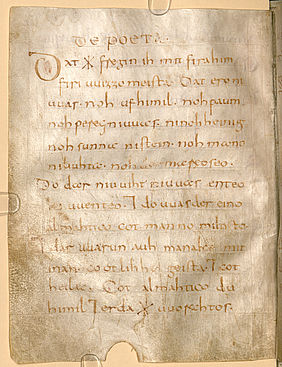 The virtual exhibition shows Bavaria’s gems of literature, select masterpieces which are related to Bavaria with respect to their creation, tradition and effect and which have made literature history. The bandwidth and diversity of this literature from ten centuries can be found exemplarily in – partly splendidly illuminated – manuscripts, printed works, collections and letters.

Exclusively such works from the various epochs are taken into account for which there holds that they were written by authors who lived in Old Bavaria, Swabia or Franconia, who moved to these regions from outside and created important works here, or that the works were created (anonymously), preserved or acquired in the area of Bavaria.

Virtual exhibition in bavarikon
Bavarian literature over 10 centuries. From the Wessobrunn prayer to Lorenz von Westenrieder