Volume 5 of the catalogue of Greek manuscripts of the Bayerische Staatsbibliothek Munich introduces 83 manuscripts. More than half of the codices originally formed part of the collection of the Augsburg trader Johann Jakob Fugger (1516 – 1575) and of manuscript holdings sold by the widely known writer and manuscript trader Andreas Darmarios to Duke William V of Bavaria in 1583. This means that they formed part of the collection at the time of foundation of the Munich court library. 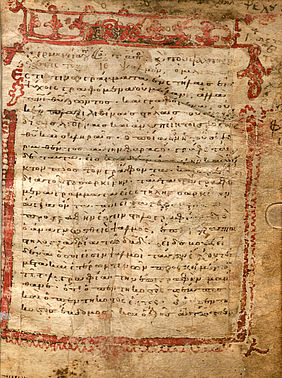 As further provenances, there are the Mannheim court library, which was transferred to Munich in 1803, the libraries of the philologist and orientalist Johann Albrecht Widmanstetter (1506 – 1557), of the family Occo, of the Dukes of Württemberg (forming part of the spoils of war of Tübingen coming to Munich in 1635), of the Florentine humanist Petrus Victorius (1499 – 1585) and secularized Old-Bavarian monastery collections.

Most volumes have a focus on either theological or liturgical works or classical, late-antique and Byzantine texts of secular literature. Moreover, there is a comparatively small number of works of medical and juridical content, humanistic composite manuscripts, as well as an illustrated pilgrims’ guidebook for Jerusalem and the Holy Land. The most important find within the scope of this cataloguing project was the identification of hitherto unknown homilies on the psalms by Origen of Alexandria (185 – 253/ 254 AD) contained in an extensive codex of the 12th century.

The scholarly in-depth cataloguing of this collection group has taken place since 1992, supported by funds of the Free State of Bavaria and of the German Research Foundation.