The Specialised Information Service (FID) for Russian, East and Southeast European Studies has acquired a license for free-of-charge, Germany-wide access to the digital source collection "Soviet Cinema Online. Archival Documents from RGALI, 1923 – 1935" with the support of the German Research Foundation. The database contains digitized archive materials from the Russian State Archive of Literature and Art (RGALI) on the formative phase of the Soviet film industry in the years from 1923 to 1935. 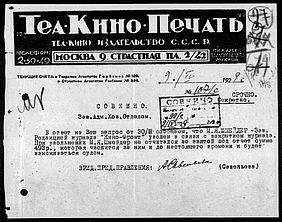 During this period, up to 1929, sometimes one hundred films were produced annually, among them such world-famous films as "The End of St. Petersburg" (1927) by Vsevolod Pudovkin or "October" (1928) by Sergey M. Eisenstein.

The development of the Soviet film industry can be reproduced in great detail with the aid of the digitized sources in "Soviet Cinema Online". It contains almost 60 documents, among them financing schemes, letters of correspondence, meeting protocols, staff lists of Gosvoenkino or lists of censored Soviet and foreign films. The archive materials give an exciting insight into the production, distribution and screening practices of the Soviet film industry and, at the same time, indicate the tendencies towards centralisation and bureaucratisation in the Soviet Union, which become apparent on the basis of the introduction of the state monopoly in the cinematographic area.

The sources can be accessed comfortably by means of a browser. The archive materials can be downloaded in the PDF format as well.