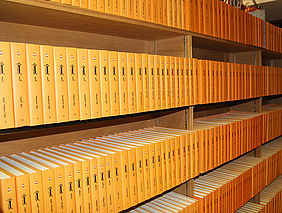 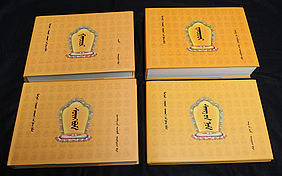 Clockwise, starting on the upper left, one volume each from the Kanjur, the Tanjur, the treasure texts and from the collected works of Tsongkhapa and Changkya Khutukhtu Ngawang Choten | © BSB

The donor is the honourable Master Chin Kung (born 1927), an internationally renowned Buddhist teacher. The donation of the voluminous work fulfils a long-term dream, since Buddhist source texts in numerous languages of the Buddhist cultural area represent an important focus of content of the collection of Asian printed works and manuscripts of the Bayerische Staatsbibliothek. The enormous consignment of books reached Munich in 41 parcels and now takes up around 12 metres of shelves.

Created between 2007 and 2010, the work represents a newly edited Mongolian complete edition of the Tripitaka (Sanskrit: three baskets). The Tripitaka is considered the authentic basis of the Buddhist canon. In Tibetan Buddhism as practised in Mongolia, it consists of two elementary parts: the Kanjur containing the teachings of Buddha and the rules of the order, and the Tanjur, the philosophical treatises and comments. In addition, it contains tantric writings of esoteric Buddhism, which had a decisive influence on religious tradition in Tibet and Mongolia. The complete edition donated to the Bayerische Staatsbibliothek comprises 108 volumes of the Kanjur and 226 volumes of the Tanjur, moreover texts by two Buddhist master teachers and so-called treasure books, secret texts by the Nyingma school of Tibetan Buddhism.

Most of the facsimile volumes are based on original prints of the Mongolian Tripitaka of the 18th century, the production of which had been sponsored by two Chinese emperors of the Quing period. At the behest of Emperor Kangxi (reigned 1661 – 1722), an adorned edition of the Mongolian Kanjur was produced between 1718 and 1720, for which 45,000 printing plates were cut. His grandson Qianlong (reigned 1736 – 1796) had the Tanjur, the collection of comments, translated from Tibetan to Mongolian between 1742 and 1749 and likewise printed afterwards. Both printing projects were mammoth projects, not only intellectually, but also technically and financially.

Director General Klaus Ceynowa: "With the Mongolian Tripitaka, we have achieved an important addition to our voluminous collection of canonical editions on Tibetan Buddhist and Buddhist culture in Mongolia."