Cabinet presentation of the series "Musical treasures"
15 November 2016 – 31 March 2017
On 18 June 1816, Gioachino Rossini's opera buffa "L'italiana in Algeri" was staged at the Munich court theatre. This was not only the premiere of a Rossini opera in Munich, but in Germany on the whole. Rossini's music took Munich by storm. 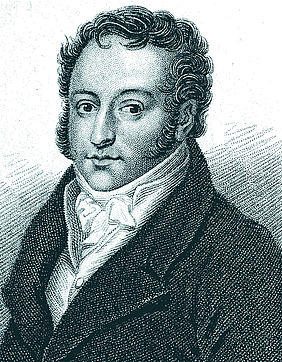 Gioachino Rossini, 1819. Steel engraving on the basis of a drawing by Louis Dupré (after 1820) | © Collection Reto Müller

Still in the same year, three more of his operas were staged – "L'inganno felice", "Tancredi" and "Ciro in Babilonia" –, the ensemble presenting a total of 17 different Rossini operas up to the year 1824. As of 1821 the local ensemble of the National Theatre additionally performed works by Rossini in the German language.

The Music Department of the Bayerische Staatsbibliothek holds a broad spectrum of source materials on these early performances in Munich. The success of Rossini's operas in Munich is not only documented in the form of scores, voices, libretti and theatre handouts immediately associated with the performances, but by a broad variety of other materials bearing witness. The musical sources are complemented by image material from the image archive of the Bayerische Staatsbibliothek and contemporary press reports about the performances. The exhibition features almost exclusively such sources which are connected with the first Italian guest performances that started in 1816.

Location of the cabinet presentation:
Hallway of the Music Department (1st floor)

Further information about the cabinet presentation