9 April – 29 June 2018
Cabinet presentation of the map collection
The Swiss Cäcilie von Rodt (1855 – 1929), who descended from a patrician family from Bern, sold her parents' estate after their death. Inspired by the adventure stories of her youth – written by authors such as James F. Cooper and Jules Verne – she started travelling henceforth. After a number of first tours in the Mediterranean, she went on her first journey around the world on her own in May 1901, circling the globe once completely from east to west. 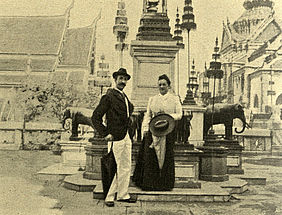 She recorded her experience in writing and published a 715 pages strong, richly illustrated report in 1903. Thirsty for knowledge, she addresses the history of every country she travelled, attentively compares the different perceptions of women in the cultures encountered, states observations on the behaviour of the colonial powers' representatives and tells enthusiastically about her joy of travelling, enjoyable travel groups, buzzing big cities and overwhelming impressions of nature.

Inspired by the travel route taken by Cäcilie von Rodt, the Division Maps and Images shows a selection of contemporary city maps and photographs of her travel destinations.