1 October – 16 November 2018
Cabinet presentation of the Image Archive
The building of the Bayerische Staatsbibliothek in the Ludwigstrasse was completed 175 years ago and thus inaugurated in 1843 – after a construction period of eleven years. King Ludwig I had commissioned the architect Friedrich von Gärtner with this project already shortly after his accession to power. 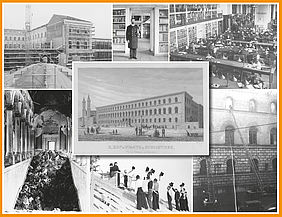 With a length of 152 metres, a depth of 78 metres and a height of 24 metres, Germany's largest blank brick building was regarded as the best German library building at the time. Up to 1944, also the Allgemeines Reichsarchiv (general Reich archive) was accommodated here.

Within the framework of a cabinet presentation in the hallway in front of the Reading Room for Music, Maps and Images, the Image Archive presents numerous reproductions of photographs from its collection that illustrate this eventful history of construction.