A recently acquired convolute of around 700 Tibetan manuscripts comes from Mongolia, which is influenced by Tibetan Buddhism. Against the background of the fact that Mongolia experienced a serious cultural setback during the time of communism up to 1990 and many monasteries, temples and Buddhist cultural goods were destroyed, the preservation of these manuscripts is noteworthy. 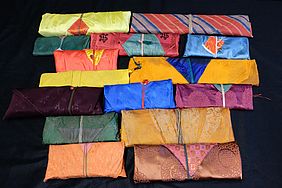 With respect to content, the collection is a cross-section of the religious everyday culture of Mongolians in the past century and contains predominantly texts from the daily practice of Lamas and practising laymen, such as rituals for fending off demons, astrological divinations, recitation instructions and invocations of the wrathful god Vajrabhairava, who occupies a special position in Mongolian Buddhism.

There are also writings from the field of Tibetan medicine, which are dedicated to therapeutic rituals or, in the form of written paper amulets with mantras, promise protection against illnesses.

Further information on the Tibetan collection