The virtual exhibition shows a cross section of the holdings, offering an overview of the history, function and use of the tablatures. At the end of the tour, we present an additional video recording showing extracts of the workshop concert "To sing many a tune or to play the organ and the lute" – music from Renaissance manuscripts of the Bayerische Staatsbibliothek, and a film which was shot in the course of the preparations for the workshop concert. 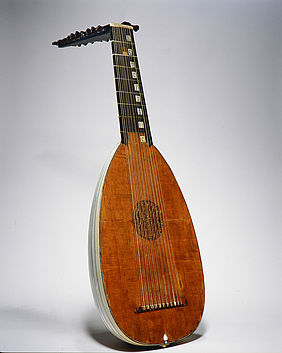 The documentation of music in writing underwent continuous change in the course of Europe's history. Factors such as further developments of composition, the establishment of new music forms and genres or innovations in the construction of instruments always also had implications for the practice of notation. In the course of the centuries, the notation was adapted to the current conditions repeatedly and honed to best match the respective requirements.

This is visible particularly clearly in the transition period from the late middle ages to the early modern era. During this time, various specialised notation forms for instrumental music – the tablatures – were established in addition to the mensural notation for vocal music. Tablatures thus became an integral part in the canon of written music tradition in the course of the 16th century in particular. It is owed to the Bavarian dukes' enthusiasm for collecting that the Bayerische Staatsbibliothek currently preserves not only the monumental Renaissance choir books, but in addition around 70 further music manuscripts of this epoch, in the form of tablatures and part books.

The manuscripts can be viewed in their entirety in the digital collections of the Bayerische Staatsbibliothek free of charge.

Virtual exhibition
Many a tune – tablature manuscripts at the Bayerische Staatsbibliothek