One hundred years ago, Ludwik Lejzer Zamenhof died in Warsaw. The Jewish ophthalmologist is the inventor of the constructed language "Esperanto". Throughout his life, he strived to further international understanding and peace by means of a neutral language. The virtual exhibition "Ludwik Lejzer Zamenhof" now offers further insight into the life and work of Zamenhof. 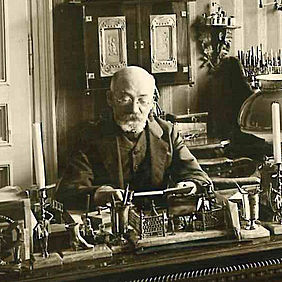 Zamenhof led an eventful life: Born on 15 December 1859 in Białystok, situated on Polish territory today, the son of a Jewish family witnessed already at an early age the conflict of the various population groups, which, due to different languages and the resulting communication difficulties, did not live together peacefully. Motivated by the desire to put an end to these misunderstandings, he developed a consciously constructed language already during his years at school and later on, while studying medicine. He published the language in 1887, which became widely known quickly under the pseudonym Dr. Esperanto that he was using.