A sensational find has taken place at the time of the 165th anniversary of the composer Engelbert Humperdinck (01/09/1854 – 27/09/1921). In the course of cataloguing works within the scope of the academy project "Répertoire Internationale des Sources Musicales (RISM)" domiciled at the Bayerische Staatsbibliothek, an autograph of Engelbert Humperdinck was rediscovered among the collection of rare materials of the Berlin University of the Arts: the dramatic cantata for three solo parts and orchestra "Die Fischerin" based on a text by Johann Wolfgang von Goethe. 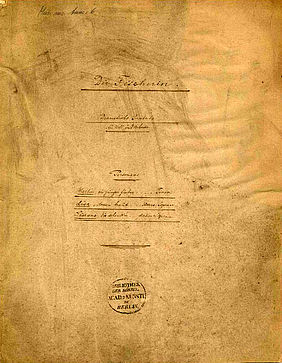 Humperdinck became widely known particularly for his operas "Hansel and Gretel" and "Die Königskinder" based on fairy tales.

Gottfried Heinz-Kronberger of the Bayerische Staatsbibliothek Munich, who identified the autograph so far classified as an anonymous work by the library of the Berlin University of the Arts, writes about his discovery: "The clean copy of the music score was written by Humperdinck in the period between 14 December 1880 and 1 January 1881, in order to submit the score for the competition for the Meyerbeer award. His application was successful. It has to be assumed that the composer’s name is not mentioned on the title sheet, since the work was for a competition. The catalogue of works by Hans-Josef Irmen (2005) contains numerous indications of letters of the composer from Xanten, where the cantata was written.

The complete version of the cantata now discovered permits once again to analyse Humperdinck’s work and to get to know the musical setting of a further work by Goethe.

The catalogue item can be found with its music incipits in the RISM OPAC, bearing the ID 1001053670."