On the occasion of the presentation of new contents of bavarikon in Amberg this week, State Secretary of Science and the Arts Bernd Sibler referred to the digital platform on the art, culture and regional studies of Bavaria as a "treasure trove of Bavarian history and culture". "This treasure trove is of inestimable value to the public, since it can be opened free of charge, independently of time and location and using diverse channels." 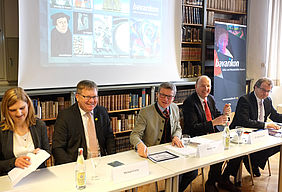 Presentation of new contents in bavarikon in Amberg on 22 January 2018 | © Bavarian State Ministry of Education and Culture, Science and the Arts 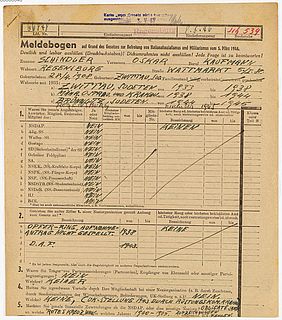 "No matter whether you use a PC, an app, a mobile phone or a virtual classroom: bavarikon enables access to Bavaria's countless gems of art, culture and knowledge – partly even in the form of impressive 3D views – and also offers complementary information. This is what research should be like in the 21st century in my view!", Bernd Sibler enthused about the possibilities of using the portal.

Oskar Schindler's filled-in form for the denazification tribunal in the original, in digitized form in bavarikon and finally in digitized form in the classroom: The original documents from the denazification tribunal of the entrepreneur were used as a case example showing how the objects from archives, libraries and museums in Bavaria are made accessible to a broad public via bavarikon and its interfaces with further platforms. Among these interfaces, there is also the Bavarian education portal mebis, in which the virtual classrooms of the Bavarian schools are accommodated. "Teachers can incorporate digitized exhibits directly into their virtual classroom, taking their pick from an abundance of over 230,000 objects. This allows for students to gain insight into historical sources in a completely different way", stressed State Secretary Sibler. "These new networking possibilities contribute to the gain in significance of the portal bavarikon."

Over 230,000 objects from Bavaria’s history and culture

Bavaria's royal crown, Dürer's self-portrait in a fur coat, the fairytale castles of Ludwig II, the Gutenberg Bible: Currently, a total of 230,275 objects are presented in bavarikon. In the context of the current digitization campaign the offer could be expanded substantially last year. Dr. Klaus Ceynowa, Director General of the Bayerische Staatsbibliothek, explained: "In the year 2017 alone, around 17,000 new digital objects have gone online in bavarikon. Through establishing interconnections between exhibits from archives, libraries, museums and numerous further cultural institutions in particular, bavarikon offers a new perspective on Bavaria's over-abundant cultural landscape – and at the same time, it is the most dynamic and most comprehensive service by far of all German regional portals."

Books, manuscripts, paintings, photographs, copper engravings, monuments and more, held by currently 53 institutions, are accessible in bavarikon. All objects can be viewed at close range, offering high resolution and a zoom function. The portal is continuously expanded by further content.

Source:
Press release no. 025 of 22 January 2018
Bavarian State Ministry of Education and Culture, Science and the Arts