The Bayerische Staatsbibliothek returns 56 unlawfully acquired books from its holdings to two institutions and one individual, thus facing up to its responsibility. 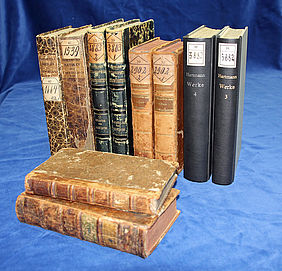 The Grand National Mother Lodge "The Three Globes" (GNML) seated in Berlin receives 45 wrongfully acquired titles from the Bayerische Staatsbibliothek. The books will be handed over in Berlin on 27 July 2017, on the occasion of a meeting arranged simultaneously with the University Library of Leipzig and the Central and State Library of Berlin, by which books are restituted as well. The NS regime had forced the German Freemason lodges to dissolve as of 1933, prohibiting the Freemasons two years later and prosecuting many members of the lodges. The restituted titles had come to the Bayerische Staatsbibliothek in 1938/ 39 through a trade-off with the SS school "Haus Wewelsburg". In the course of this transaction, the library had received numerous books from Freemason lodges from the Reich Main Security Office in Berlin in return for duplicates of its own. The majority of the works belonged to the library of the lodge "The Three Globes", a number of books belonged to lodges which were not re-established after the Second World War, with the GNML now representing their legal successor.

On 24 July 2017, the Bayerische Staatsbibliothek returns ten book titles of the "Kartell der freiheitlichen Vereine" (cartel of freethinkers' associations) in Munich to the "Dachverband Freier Weltanschauungsgemeinschaften e. V." (umbrella organisation of associations of free philosophies of life). The local group of the cartel had been prohibited in 1933. These books had been seized by the Geheime Staatspolizei, a secret police organisation of the NS regime. Some of the books also bear property stamps of Max Riess, one of the cartel's founding members.

Already on 4 July 2017, the Bayerische Staatsbibliothek returned an edition of Rosa Luxemburg's "Koalitionspolitik oder Klassenkampf?" published in 1922 to Ernst Grube, the great-grandson of the original owner Wilhelm Olschewski. The book bears the property stamp Wilh. Olschewski. It indicates two resistance fighters in Munich, who were murdered by the national socialists. Wilhelm Olschewski and Wilhelm Olschewski junior, father and son, were active members of the communist resistance during the 2nd World War. The book was confiscated presumably in 1942 and finally given to the Bayerische Staatsbibliothek.

Klaus Ceynowa, Director General of the Bayerische Staatsbibliothek: "The Bayerische Staatsbibliothek is working continuously and efficiently on returning works that were acquired unlawfully during the time of the NS regime to their owners or the descendants of their owners. With the public restitution of the stolen books and manuscripts, the library faces up to its responsibility for its involvement in NS injustice."

The Bayerische Staatsbibliothek has been searching actively and initially on its own initiative for such confiscated items among its collections since 2003: Thus, the Thomas Mann Archive in Zurich received 78 volumes from the library of the writer and laureate of the Nobel Prize for literature in 2007. The support by the German Lost Art Foundation has made a big contribution to the progress of research and speedy restitution of items: In 2015 the Plock pontifical, the oldest Polish pontifical, could be returned to the Catholic Church in Poland. Only a few weeks ago, the Bayerische Staatsbibliothek together with the Directorate General of the Bavarian State Archives returned 44 works to the descendants of the Munich Orientalist Prof. Karl Süßheim.