In May 1818 Max I Joseph decreed a new constitution for the Kingdom of Bavaria. He thus made Bavaria not only one of the most modern constitutional states, but laid the foundation for a stable legal system which remained in place for a hundred years. The great importance of this step is also illustrated by a symbolic act: The Bavarian kings henceforth swore an oath of allegiance to the constitution when they acceded to the throne. On the occasion of the 200th anniversary of the constitution, bavarikon presents a virtual exhibition on this milestone. 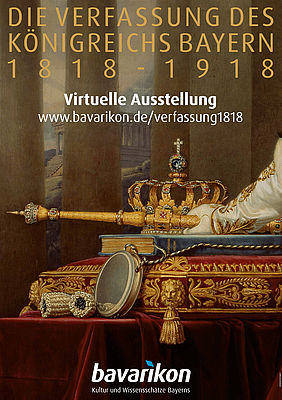 The cultural portal has combined 66 high-carat exhibits from ten cultural institutions, and cordially invites you to explore the constitution of 1818 with all its facets. Divided into eight sections, the exhibition explains the constitution's history, including the immediate background history, and the most important development steps up to the year 1918.

Digital copies of the original deeds of the "Konstitution" (1st constitution) of 1808 and of the "Verfassung" (2nd constitution) of 1818, as well as of the proclamation of the Free State of Bavaria of the year 1918 will be on display among other exhibits. A particularly impressive item is the ark of the constitution from the Bavarian Landtag: it can be seen in 3D in bavarikon.

The virtual exhibition stands out for the following reasons:

The virtual exhibition is a project of the Bavarian Main State Archive in cooperation with the Bayerische Staatsbibliothek and the Haus der Bayerischen Geschichte (Centre of Bavarian History).

Virtual exhibition: The constitution of the Kingdom of Bavaria 1818 – 1918

About bavarikon:
bavarikon is the portal leading to the art, culture and regional information of the Free State of Bavaria. It presents treasures of art and culture from Bavarian cultural and academic institutions. Since 2017 virtual exhibitions have been arranged on a regular basis. bavarikon is a joint initiative of the Bavarian State Ministry of Science and Culture and the Bavarian State Ministry of Finance, Land Development and Heritage.