The Bayerische Staatsbibliothek is expanding its digital services again. Users from the fields of scholarship and research can now include all digital copies produced so far – thus around 1.2 million volumes with around 270 million book pages and 43 million images – in a similarity-based image search for similar motifs and images. The service is available at https://bildsuche.digitale-sammlungen.de and can also be used on mobile terminals. 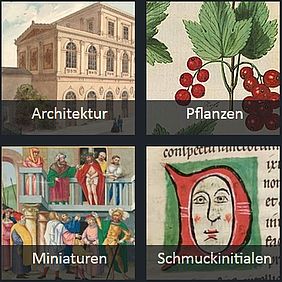 The search runs the gamut from illustrations of medieval Bible manuscripts and photographs to boulevard magazines of the 1920s. In this way, the similarity-based image search unearths unknown, unusual and frequently surprising connections between highly different works from different epochs. The integrated upload function further enables users to use their own images for searching the entire holdings of digital copies of the Bayerische Staatsbibliothek for similar motifs, thus including also all digital objects contained in the cultural portal bavarikon.

Director General Klaus Ceynowa: "The new service of enhanced similarity-based image search opens an alternative, non-textual access to our collections, thus creating new perspectives for digital iconographic research. Once more, this tool bears witness to the propensity to innovate of the Bayerische Staatsbibliothek."