The Department of Manuscripts and Rare Books, Division Personal Papers and Autographs, has acquired part of the personal papers of the Munich painter and academy professor Ludwig von Herterich (1856 – 1932). 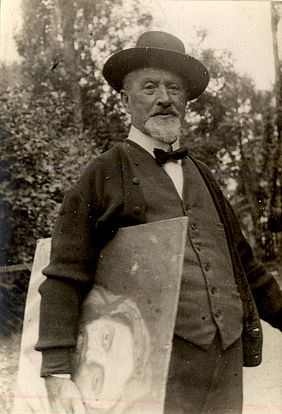 Ludwig von Herterich was born in Ansbach on 13 October 1856. He received his first schooling and training in the workshop of his father Franz Herterich. Later, he enrolled in the Munich Academy and worked in the atelier of Wilhelm von Diez. Herterich is one of the most important representatives of the Munich school, was a co-founder of the "Secession" and a much acclaimed portraitist and painter of monumental works. From 1896 to 1898 he worked as a tutor at the Academy of Fine Arts in Stuttgart and became professor at the Academy of Fine Arts in Munich in 1898. He was awarded the Maximilian Order (a personal distinction) in 1908. Ludwig von Herterich spent the last years of his life in the small artists' village of Etzenhausen near Dachau, in a villa originally commissioned and owned by the painter Hermann Linde (1863 – 1923).

The acquired part of the personal papers is important above all against the background that a large part of Herterich's personal documents were destroyed by a fire in the Herterich villa in 1959. The part of his papers now acquired had either been kept in a different place at the time or could be saved from the flames. The documents offer insight into various phases of the artist's life. There are numerous sketch books, correspondence with fellow artists and family members, photographs and official documents and printed matter with reports about the artist, his works and exhibitions.