Since July 2019, researchers have been enabled obtain access to the extensive source database "Secret Files from World Wars to Cold War" following individual registration with the Specialised Information Service for Historical Studies. 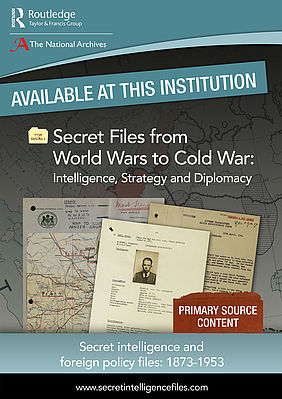 The resource offers access to secret-service and foreign-political documents of the British government from the time from 1873 to 1953, with the majority of sources being from the 1930s and 1940s. The main foundation is formed by documents of the Permanent Undersecretary’s Department (PUSD), which served as an interface between the foreign ministry and the British secret service.

"Secret Files from World Wars to Cold War" comprises nine segments, which show the perspective from which the British government and the secret service saw the era of the World Wars and the early times of the Cold War.

Among other things, the database also contains original reports by the secret service about German, Japanese, Italian and other international signals which had been captured, decrypted and translated.

Access has been enabled also for registered users of the Bayerische Staatsbibliothek.

Via the database information system