Tusculum, near Rome, was the city where Cicero had his country house, which served as his retreat. Tusculum was considered the epitome of leisure and of valuable escapes from a demanding everyday life – and gave its name to the famous book series. The "Sammlung Tusculum" (collection Tusculum) is the most extensive book series on Greek and Latin literature in the German language area. 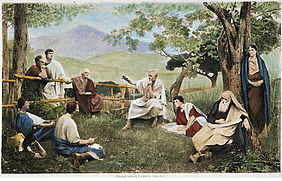 The e-book collection, for which the Bayerische Staatsbibliothek acquired a license a short while ago, comprises 270 volumes and, since 1923, has offered all great texts of antique philosophy and literature:

All titles of the series which had been out of print so far are also contained in the e-book collection.
The "Sammlung Tusculum" will also take account of late antique, Christian, as well as Byzantine and Neo-Latin literature in the future.

Access is available to registered users of the Bayerische Staatsbibliothek via the Database Information System.
The e-books have also been entered in the OPACplus/ BSB catalogue.