To mark the 100th birthday of the Free State, bavarikon presents the exciting and dramatic history of its beginnings in a virtual exhibition. Five chronological sections and an in-depth presentation bring the revolutionary years 1918/ 19 closer to you. The focus lies on the events taking place in Munich, which were decisive for the whole of Bavaria. In addition, diverse developments in ten other locations of Old Bavaria, Franconia and Swabia will be included. 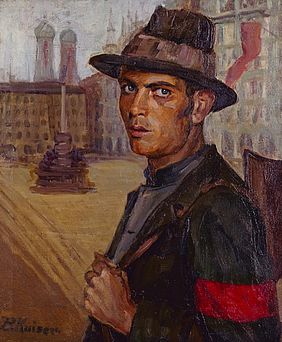 In 1918, an epochal uprising took place: The First World War came to an end and in Germany the people rose against monarchy.

In Bavaria, the revolution of 7 November brought over 700 years of Wittelsbach rule to an end. Kurt Eisner (1867 – 1919) proclaimed the "Free State of Bavaria". A spirit of innovation reigned over the country and the situation would not calm down: In February 1919, Eisner was murdered; in April, radical revolutionaries proclaimed the Soviet Republic in Munich. Government troops violently crushed it in May. The constitution adopted in August 1919 finally enshrined parliamentary democracy as a form of government in Bavaria.

About the virtual exhibition

90 outstanding exhibits from archives, libraries and museums will illustrate the decisive changes and upheavals of this period – with all their groundbreaking achievements, but also with their problematic side effects and consequences.

The virtual exhibition is a project of the Bayerische Staatsbibliothek, created in collaboration with the Staaliche Archive Bayerns (Bavarian State Archives) and with the Haus der Bayerischen Geschichte (Center of Bavarian History).