The Bayerische Staatsbibliothek receives the personal papers of Anna Wimschneider (1919 – 1993) as a donation from the community of heirs, i.a. the handwritten manuscript of her autobiographic novel "Herbstmilch" ("Autumn Milk"). 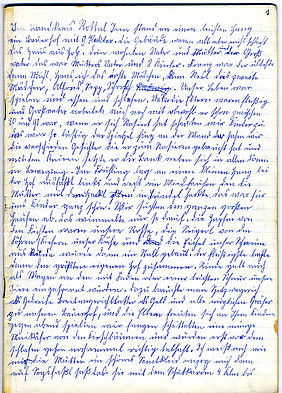 The core piece of her personal papers is the handwritten manuscript of her autobiography "Herbstmilch", which was written by Anna Wimschneider in German script in two A4 paper books in her farm's kitchen. The novel was published by the Piper publishing house in 1985 for the first time and became a best-seller. In 1988/ 89 Joseph Vilsmaier made a film based on Wimschneider's memoirs. The film became one of the greatest box office hits in Germany in 1989. In addition, several stage-play versions were created on the basis of "Herbstmilch", as well as an audio book (2007).

Further, the personal papers also include numerous photographs, correspondence with the Piper publishing house and letters to the editor. In addition, deeds such as that of the Federal Cross of Merit and a documentation of her public appearances on radio stations and television also form part of the archive.

Dr. Klaus Ceynowa, Director General of the Bayerische Staatsbibliothek: "The life and work of Anna Wimschneider are exemplary for an entire generation of people in the countryside. We feel honoured to be permitted to conserve a piece of German contemporary history by receiving her personal papers."