Passion plays in the Upper Palatinate, poetry in the Bavarian dialect, the flight and exile of Bavarian authors between 1933 and 1945 – the Literature Portal Bavaria presents a range of new topics about interesting historical and regional aspects of Bavarian literature. 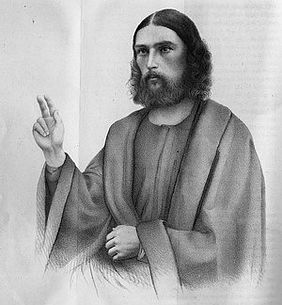 In October 1937 the writer Bruno Frank and his wife Liesl started their journey to the New World on board the luxury liner "Île de France" | Image source: Wikimedia Commons

The scenic presentation of the suffering and death of Christ came to its fullest bloom during the time of baroque piety. Reformed religious orders such as the Franciscans and the Friars Minor Capuchin used the religious play as a physical exercise of piety as understood by the Catholic renewal movement. The bans imposed by the state and the Church during the time of Enlightenment constituted an important turning point, however. It was only during the late 19th century and predominantly the 20th century that a revival of passion plays took place in the Upper Palatinate. The locations and stations of this lively Passion play landscape are introduced in the Literature Portal Bavaria.

Dialect-coloured poetry has been decried frequently as overly folksy, crude or provincial. Nonetheless, enthusiasm for the local vernacular and for experimenting with language has not diminished – in Bavaria in particular. Not only has a young Bavarian music scene developed in recent years, but the Bavarian authors in particular have developed strong emotional ties to the Bavarian dialect and to the authenticity of expression. The following essayistic remarks by the social journalist and language practitioner Andreas Unger take a very personal look at the dialectal aspects of poetry in the Bavarian vernacular.

Between 1933 and 1945 millions of people were on the run, among them also many artists and intellectuals from Germany. Faced with the start of long years of intellectual diaspora, the writers' reactions to their situation as emigrants were highly diverse: Some became mute; others supported the political resistance against National Socialism with their exile literature. Many did not return after 1945, but remained exiles for their complete lives. An overview in the Literature Portal Bavaria addresses selected exile locations and authors of importance for literature in Bavaria.