Authors on the Fraueninsel, female writers in Munich's Maxvorstadt quarter, the struggle for modernity in the civil women's movement – the Literaturportal Bayern presents new excursions and topics on interesting historical and regional aspects of Bavarian literature. 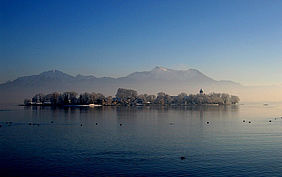 Fraueninsel | Photograph in the public domain 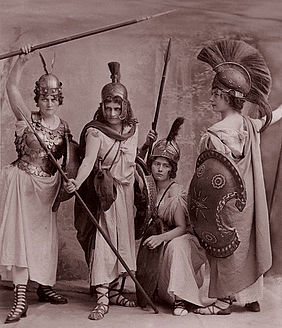 The island of Frauenchiemsee with its Benedictine nunnery belongs to the oldest cultural sites of southern Germany. The first abbess of the nunnery on the island known by name was Irmingard, a great-granddaughter of Charlemagne (747/ 748 – 814) and a daughter of Louis the German (around 806 – 876). However, the ancient nunnery and the literature created here are not the only reasons for the island's importance as a place of culture and literature. It is scarcely known that also many authors have attested to this – among them Ludwig Steub, Karl Stieler, Max Haushofer, Wilhelm Jensen, Felix Schlagintweit, Felix Dahn, Anna Mayer-Bergwald, Emma Merk and Carry Brachvogel. The excursion explores the marks that these persons have left.

Around 1900, Schwabing was not only the lively center of Munich's art and literature scene, but also an important center of the civil women's movement. Persons such as Carry Brachvogel, Anita Augspurg, Sophia Goudstikker, Emma Merk or Marie Haushofer, Helene Böhlau and Emmy von Egidy lived in the area of today's Maxvorstadt quarter. Their houses, work locations and networks, such as the "Verein für Fraueninteressen" (association for women's interests) or the Munich association of female writers were almost all located there. The city excursion tracks the footsteps of these Munich women's rights activists, offering two itineraries, and thus provides a new perspective on a city quarter that has always been very lively anyway.

Since 1894, Munich has been under the decisive influence of the modern women's movement advocating women's rights to education and gainful employment. During the ensuing period, the movement gains great influence on the middle classes throughout Bavaria. Women's rights activists, female writers and artists, all of them members of the association for women's interests and searching for a new self-concept of women, have a decisive impact on the city at this time. How did this come about? In addition to Emma Haushofer-Merk and Carry Brachvogel, the topic focuses on the Munich writers Helene Böhlau, Emmy von Egidy, Marie Haushofer and Countess Eva von Baudissin.

To the entry in the topic list of the Literaturportal Bayern